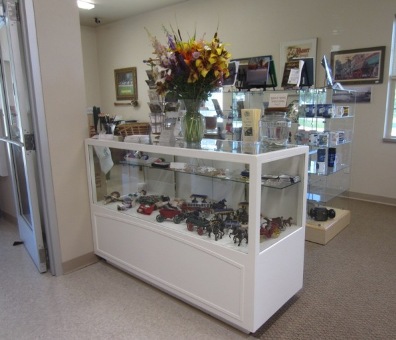 To buy any of the following items make checks out to: OCHS
and send to:

Please include $4.00 for shipping.  Click on a title to see a picture of the item.

8 1/2″ x 11″ copy of the 1871 Birds’ Eye View of Oconto suitable for framing.  Accompanied with a legend identifying some of the prominent structures in the city at this time period.  The OCHS has found this view to be very accurate.

Celebrating 75 Years of Preservation and History By Duane Ebert     $5.00

To commemorate the 75th anniversary of the Oconto County Historical Society, Duane F. Ebert, Director Emeritus, and Past President and Past County Historian of the Society, has chronicled the history of the OCHS in a written booklet format.

The story of one of the families of Couillardville, WI.  This community typifies many rural areas settled in the late 1800s.  Descendents of Couillardville’s early families started gathering in 2002 to reminisce.  This grew into an annual event and published books about the early years.

From McCauslin to Jab Switch: A History of Logging in Oconto County  By Della Rucker     $25.00

“The forests from the McCauslin in the north to Jab Switch (another name of Oconto) on the bay have shaped this county’s landscape, its people, and its heritage.  This book details that story and thus fills a void in the county’s written history.”

He was just a hayseed from Wisconsin, raised on beer, cheese, and country music. …  This is the story of one man’s colorful and adventurous life, interwoven with our nation’s history, and extending over a large part of the 20th Century.

A History of Lakewood, Wisconsin: small town success in the Northwoods  By Tom Thielke     $24.00

Not long ago Tom Thielke realized that the stories of the people of Lakewood were going to be lost if nobody collected them.  At the annual Lakewood reunion, which his two sisters coordinate, he was able to get many people interested.  He has gathered stories and pictures to capture the community of Lakewood.  The result is the book “A History of Lakewood”.

The OCHS has undertaken the reprinting of George E. “Jimmie” Hall’s book A History of Oconto.  The first printing came out in 1969 as part of Oconto’s Tri-Centennial celebration and was met with wide acceptance and popular demand.  For the 40th anniversary a limited number of hard-cover books were printed, which were again met with popular demand.  The Society has had soft-covered books printed which are now available.

“This early history from 1839 to 1900 has been compiled using area newspapers, county board proceedings, atlases, various maps, county plat books, other histories, the autobiography of Almira Volk, and an unpublished journal of Almira’s daughter, Maria.  It strives to give as complete a history as possible using primary source material.”

“My intent for this book is to provide an easy-to-read narration and picture book of the Leigh family.  It is a continuation of my “I Remember Book” printed in 1974.”

This collection of Humorous Fishing stories brings back to life, experiences from the author’s background of adventures in the U. P. and some Canadian Fly-in fishing trips.

Humorous Stories From the U.P. Hunting Camps  By Robert Hruska

Each story is a bonafide true experience written in the humorous way of the Yooper!!

The “Stories from the U.P. Deer Camps” are true in the image of the U.P. hunter.  They all took place in different locations in the U.P., particularly in Menominee County, Michigan.  $10.00

Ladies of the North

This CD is a video of the performance of the Holt & Balcom Logging Camp Museum when it presented a look at Oconto County history through the eyes of the women who helped settle it.  Kathleen Marsh, Kathy Moerman, and Beth Hartman portray the three kinds of women who worked beside their men to tame northern Oconto County.  $10.00

Leon Janssen started collecting stories of Couillardville in 2001 from the neighbors who attended the Machine Shed Reunions in Couillardville.  While parts of this story are built on historical records, most of this book recounts life in this special community as seen through the eyes of those who were given the gift of growing up in this special place on earth.

This book is being written to preserve Morgan and a way of living that produced strong, resilient human beings.

A sequel to Morgan relating lives and family trees of children and grandchildren of the early settlers.

My Mother Kept a Scrapbook: The True Story of a WWII POW  By Gerhard Johnson as told to Kathleen Marsh     $14.50

“Captured during the ill-fated offensive in Italy in January 1944, Army Private Gerhard Johnson did not expect to ever see his family again.  As a prisoner of the Nazis, he endured 15 months of hell, deprived of the most basic human needs: food, water, shelter, sanitation, and medical care.  Determined to come home to the only woman he had ever loved, Gerhard lost over a third his body weight while somehow managing to survive.  This is his story.  Meanwhile, back home in Central Wisconsin, his mother wrote letters, sent Red Cross parcels, and filled a scrapbook in an amazing effort to keep her absent son alive as long as she possibly could.  This is her story, too.

“This volume contains all the original material which was printed in the Oconto Pioneer by editor George Ginty regarding the Oconto River Sackers.  This group was organized in October of 1861 as the second company out of Oconto County.  At Camp Randall in Madison it became Co. F of the 12th Wisconsin Regiment.  The company proceeded to the western front in Kansas, to Vicksburg for that city’s siege and surrender, and then east to join Sherman’s march to the sea.  It was mustered out in July of 1865.

In addition, several items from the pocket packet of a private in the Civil war are included…”

“…it is our hope that the information contained here will give the reader a glimpse of this time in Oconto’s history commemorating the 50th anniversary, in 2007, of the last performance of Oconto’s Park Avenue

“The writings of Junice Peek and a glimpse at the early years of Lakewood, Wisconsin”

“The stories of the pioneers live on through their children.”

The Stanley Toy Company began production of cast-iron and cast-aluminum toys in 1946 and became a leading toy manufacturer until a fire destroyed the building in 1949.  David Retzlaff has done extensive research on all aspects of the places and people involved with this interesting story.

“Jerry looked forward to the day when he would have his very own calf.  Finally, the day comes, and things don’t turn out quite as Jerry had planned.

Experience the love and the pain that a boy goes through as he raises his calf.”

In 2000 a group of Lewis and Clark history enthusiasts organized a group, the Discovery Exhibition of St. Charles, to recreate the epic journey of Lewis and Clark for the 200th anniversary from 2003 to 2006.  Authentic reproductions of boats, equipment, clothing, and living conditions were used to replicate the expedition on the exact days as the original.  Oconto native, Ken Altergott, joined the group and wrote about the four year experience.

The Truth About Townsend traces the history of a rough and tough North Central Wisconsin logging community from the Civil War to the opening days of World War II.  It is a carefully-crafted historical account of loggers, farmers, hunters, bootleggers, merchants, resort owners, and clergymen who somehow managed to scratch out a living in the wild and woolly Wisconsin Northwoods.

More of the compelling historical narrative chronicling the amazing tenacity and grit of a tiny Wisconsin Northwoods community.

Compelling finale of a series relating the history of a tiny northern Wisconsin town’s rebirth from a dying resort area into a baby boomer’s retirement sanctuary.

A Union soldier Remembers: The Story of James S. Anderson  By Christopher Goetz     $25.00

“Through the diaries of one of these men [Company A of the 5th Wisconsin Volunteer Regiment from Manitowoc], James S. Anderson, we will see the war through his eyes.  Of the 105 men who left Manitowoc that bright summer day in 1861, less than 30 would survive the war and return home.  Experience what it was truly like to fight in the Civil War by watching A Union Soldier Remembers!”  58 minute video with 19 minutes of director-cut bonus scenes.

“Resonating with poignancy and humor, When Chores Were Done contains stories you’ll want to read over and over again.”

“Within each story we see just how warm, loving, and supremely educational growing up on a farm could be, for it is here that a young boy learns not only how to take the head off a chicken and drive a tractor like a grown-up, but to deal with illness, disability, and death.”

The daughter of the founders of Oconto Falls, John and Almira Volk, Maria’s journal was rescued from a dumpster and landed in the hands of Diane Nichols.

“Most farm women never thought to record their thoughts; Maria did and though her story is not one of happiness, it gives us much insight into the life of many others like her.”