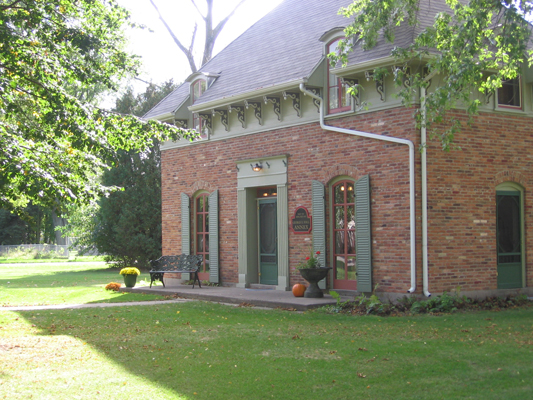 In 1952 Donald Baldwin came upon human remains to the west of Oconto near Suzie’s Hill.  This presented an issue to the Oconto County Historical Society as to how to best display the artifacts that were unearthed.  Up to this time the rooms in the Beyer Home Museum had various displays such as military and religious.  This was not the ideal presentation of the home or the artifacts.  It was proposed, then, to build another building on the grounds that would accommodate items that did not fit in the home, as well as serve as an office and meeting area.

Donations were first solicited in 1954.  Jeannette Holt pledged $5000 to honor her father, W. A. Holt.  On July 8, 1955 a committee met to settle on a plan.  The plans originally called for the front room to be divided into several areas, but the present layout was finally selected, except for the Waterways room.  Several portions of the building were salvaged from area buildings to be used.  Most of the store fronts in the Main Street display were taken from actual stores in Oconto.  Doors and wainscoting from the Oconto County Courthouse were installed upstairs.  The front door was taken from Joseph Hall house.  The bricks from the Pierce Hotel were used to face the building.

Although they did not have all the funds needed they decided to break ground on September 9, 1957, with confidence that funding would be found.  The last payment was made from the bank account in September 1958.  A balance of $10.93 was left when the bank account was finally closed in 1960.

In 1978 it was decided to make two additions to the Annex.  One was a chapel on the west side.  An extra room was also added to the north side, called the Wellington-Wilson addition, and displayed a parlor scene.

In 1979 the OCHS Board honored Jimmie Hall by renaming the building as the George E. Hall Annex.  As Duane Ebert announced at the dedication “For a lifetime of devotion to a cause, to a community, to people, and for an ideal, it is only fitting and proper that we should dedicate this day, and this building to Jimmie Hall.  For all here, and for me may this honor to you express our appreciation and admiration.”

After issues with leaking and flooding these additions were removed in 1981 and a new addition was put on the west end that was connected better and more stable.  It houses the Waterways Exhibit.  The Copper Culture displays were moved to the Werrebroeck home at the Copper Culture Park when it was opened in 1982.

It has been almost 30 years since any real change has been made to the George E. Hall Annex.  With the refurbishment of the Society’s vehicles an improvement to the facilities is also needed.  See the page about the proposed pavilion.