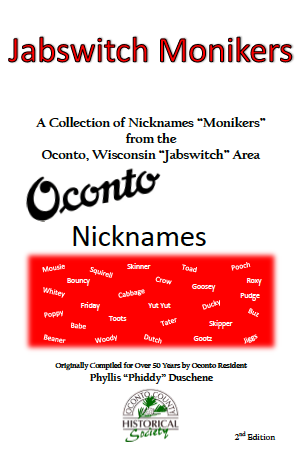 For more than 50 years Phyllis “Phiddy” Duschene collected nicknames of people from Oconto.  In 1981 she finally put them in a printed booklet, “Jabswitch Monikers”, for the general public.  There were two more updates for the family.  In 2012 Phiddy was honored by OCHS with the George E. Hall Award for documentation of Oconto County History.

In 2019 it was decided to reprint Jabswitch Monikers but with as many real names included as could be discovered.  To that end many avenues were explored.

Two events at the OCHS Museum were held to have people gather and reminisce to recall names.  Small gatherings were held at Woodlands with the senior citizens to get their input.  Many families were contacted to ask about family nicknames.  Yearbooks, newspapers, obituaries, and cemetery stones were consulted.  Many real names for nicknames already gathered were found, but many more nicknames were found and suggested as well.

To keep the integrity of Phiddy’s original work, it was decided to separate this booklet into two parts.  The first includes all the names printed in the first edition of her book.  The second includes all the new names discovered in trying to find the real names.

More names keep surfacing but we finally had to stop.  Bay Impressions did a wonderful job of creating a cover and printing the books.  The price is $15.00 + tax.  Since the Museum is closed for the season they will be available for purchase at Bay Impressions.  If you need it shipped, there will be an additional $4.00 cost.  Send the request with payment to: OCHS, PO Box 272, Oconto, WI  54153.  It would make a great Christmas gift!